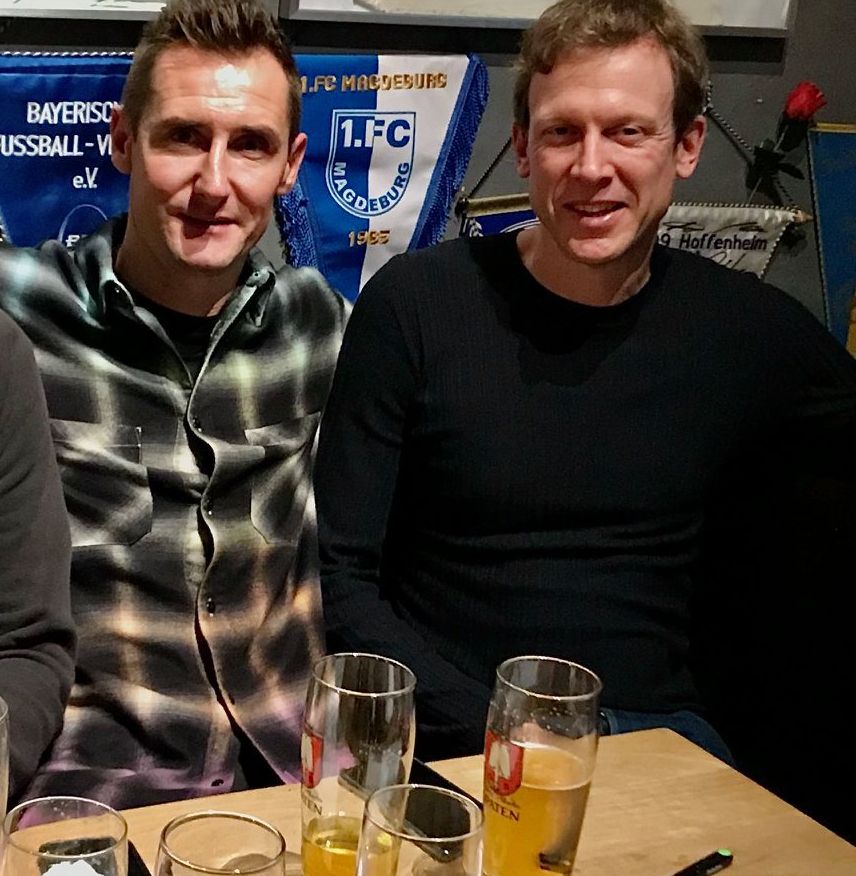 There are few authors on sport’s literature market that are guarantors of quality. When you see their name on a book cover you already know it must be an interesting story. One of them is Ronald Reng – author of bestsellers about Robert Enke, Miroslav Klose or stories about Bundesliga from Heinz Höher’s perspective. This is why he answered for a couple of my questions.

– Before we get to the point, I wanted to ask you what you told me when I asked for an interview. In fact, in Germany you have no website, no medium devoted to sports books?

– Well, there is a page called „Sportbuch” on Facebook. But it’s in Dutch and apparently not very popular.

– It has five followers…

– It’s unbelivable. Your market, the German market, is one of the most developed in terms of sports literature in Europe.

– That’s true. Just this winter, there were three sports books among the 20 bestselling non-ficton titles in Germany, a quite artful Dirk Nowitzki biography, the autobiography of Borussia Dortmund’s CEO Hans-Joachim Watzke and my Miroslav Klose biography. And that seems to proof the trend. Quality sports books like Zlatan Ibrahimovic’s autobiography tend to sell more then 50.000 copies in Germany.

– In Poland, such sales are rare.

– Having said that, sports books in Germany are a new phenomen of the last decade. Up to the year 2000 or 2005, there were hardly any sports books of standard in the shelves. I remember discovering with awe in the 90s in London the anglo-saxon school of sports writing. I read David Remnick’s biography on Muhammad Ali and thought to myself: „Now, one day I want to write a book like that.” It was all new to me that a sports book could be thrilling, intense, with a great story-telling and an angle on society, not only sports.

– Okay, let’s get to the point, then. Your book about Robert Enke – „Ein allzu kurzes Leben” – was chosen by us as the Sports Book of the Year 2015 in Poland.

– Yes, I even got a trophy, like a football player winning a tournament. That was very kind of you..

– However, I assume you would rather not write it. Not in this form. Tragic form. Was it difficult for you?

– I certainly would give a lot to change the ending of the book, of Robert’s life. But on one hand I actually was grateful that I could write the book. Because doing all the research, talking to all the people close to him, I learnt and understood what had happened to him, why his illness, the depression, killed him. On the other hand I was immersed for ten month in the life of a friend, who just killed himself; for ten month there was nothing else on my mind but Robert and the fact that he was not here any longer. That made me very bitter at the times.

– I say all the time, despite the passage of years, that this is one of the best sports books that has been released in Poland recently. Because this is not strictly sports book. Not only about sports, it is multidimensional. After the publication did other athletes contact you with the same problems?

– Not only athletes, but people from all walks of life who suffer from depressions. It seems that many found some comfort in the fact that they were not the only ones suffering, that even Germany’s Number one goalkeeper was helpless against this disease. Til this day I work on a voluntary basis for the Robert-Enke-foundation to explain psychologial illneses. For example I do pep talks at the football acadamies of the German Bundesliga sides on the subject.

– It is your new mission.

– I feel that’s a duty Robert’s death has put on me: Go out there and explain depression to the world. Help fighting the disease.

– You are an active author and you are constantly writing. The question is, will you be able to write something more important than this book in your life?

– Another of the characters in your publications – Heinz Höher – also found you in connection with depression, is that right?

– He had read the Enke book and wanted to meet me, for one reason because, after reading Robert’s story, he feared that one person close to him could also be suffering from depression.

– And that’s how the book about the Bundesliga was created.

– Sort of, yes. I talked to Heinz Höher for hours and listening to his life story I thought: He has such a rich and crazy story to tell – this needs to be told to the world. But he was a forgotten figure at the times, a once great Bundesliga manager who’s carreer was finished. Nobody would buy a biography about him. So I came up with this idea: What if I would tell the story of the Bundesliga, of the last 5 decades of German football by telling the story of one man who had been always there? In american literature this is a proper field: telling history from above, through the eyes of ordinary people.

– So you can say that you „dusted” him to the wide audience. And he needed it…

– That was a nice side-effect of the publication: Heinz Höher became alive again, enkindled by the attention the book and hence he himself received.

– So far the main characters of your books have been founding you themselfs. Was it like that with Miroslav Klose?

– No, I am actually proud of the fact, that for the first time, the story did not find myself – if that’s the right expression – but I went out to ask Miroslav if he would be interested that I write down his life-story. He said, he hadn’t read many books himself, but that made him even more curious about the idea.

– Klose has a very negative image in Poland. He is accused of hating his homeland and disliking his country of origin. Your book denies these accusations.

– I don’t deny anything. I just show the facts. Miroslav has very fond memories of holiday’s in Poland, of picking gooseberries and making marmelade at his grandmother’s garden. Even when he was already an adult, he deliberately traveled to Poland for his holidays, because for him it’s the country of many warm and heartful people he knows. He has a Polish wife and speaks Polish to his children. He calls himself ‘a German with Polish roots’. Show me one evidence that ‘he hates Poland’. You can’t. Because there is not one. Miroslav holds Poland in high esteem. How that absurd image of him was created in Poland is an interesting example of the power of media pictures in the 21th century.

– Exaclty, his father Józef did not really want to leave Poland. It was an impulse.

– His parents flew Poland like hunderdthousand others in the twilight years of the Communist regime, when the economy was really breaking down. Miroslav’s mother was desperate, she didn’t want to leave her home country. But Miroslav’s father is a man with a stern will. Once he came to the decision that the family had no future in a dying economy, he was absolutely determined to find a better life somewhere else.

– It was surprising to me that Klose worshiped his own body. Something that is now reserved for admiration of Cristiano Ronaldo, who is supposed to know and take care of every, even the smallest muscle of his own body. Miro was doing that a long time ago, his knowledge about his muscles sometimes outperformed knowledge of his great physiotherapist, Klaus Eder. Of course I’m intentionally exaggerating.

– Yes, that was also very fufilling for me: to find out about the Miroslav Klose nobody knew, about his inner character and his hidden interests, like his deep fascination for the anatomy of the human body. Everytime we talked about an injury he suffered during his football carreer he became really engaged to explain me the details.

– Slowly coming to the end, what can we expect from the next book by Ronald Reng?

– Since 8 years now I follow 3 kids from a football academy who dreamt about becoming a professional footballer. Now they are 21. One can see what became of their dreams, so I guess I am going to write their story down in the next couple of years. But none of them has any Polish connections, unfortunately. Mind you, I could talk to a friend, Kosta Runjaic, who is coaching Pogoń Szczecin at the moment, to sign one of the three. Then there would be a reason to publish the book in Poland too.